Bitcoin transactions consist of one or more inputs (the source of the funds) and one or more outputs (the recipient of the funds). As a simple analogy, if a transaction is a check; the input is the writer of a check and the output is recipient of the check. Bitcoin isn't account based like checks, but it is a concept most people are familiar with.

Transactions must be validated in a similar manner to a bank ensuring a check was signed by its owner and the account has enough funds for the check to clear. For the sake of this discussion, all transactions that have made it into the mempool are valid transactions.

Transactions have a weight associated with them. This weight is based on the size and composition of the transaction. The weight is important because each block has a finite amount of space. We can think of the weight as the cost for a miner to include the transaction in a block.

We make this distinction because we are concerned about transaction selection and parents that are already in blocks have already been selected!

We are left with a problem input that looks something like this:

Miners of Bitcoin perform transaction selection according the following rules.

Asking us to optimize item picking given a size constraint is a canonical knapsack problem. There are two simple algorithms for solving knapsack:

Because we know there are other constraints at play, we're going to start with the greedy algorithmlink.

This algorithm sorts items by a value/weight ratio. You can think of this as including the best bang for the buck items. This algorithm simply adds items until nothing else fits.

But there is a wrinkle: parent transactions.

This severely complicates the simple knapsack problem outlined above. We now need to track whether a transactions parent's have been included and either not include the transaction (while simple is probably sub-optimal) or defer inclusion until all parents have been selected.

From an algorithm analysis standpoint this could get ugly very quickly. The check for deferred transactions can quickly trigger a cascade of checks and rechecks of the list. There is probably a better way.

The nature of the parent child relationship looks and feels like a graph. When looking at problems, I like to spend some time understanding what I am up against. So let us explore what transactions look like when represented as graphs.

Transactions as a Graph

Bitcoin transactions create a chain where each input references the output of a prior transaction. This get a bit more complex because transactions can have multiple inputs and multiple outputs. As a result, you can end up with a variety of structures for these transaction chains.

A few scenarios of parent-child relationships in the mempool:

A child transaction can have a single parent in the mempool. If we repeat this multiple times we end up with an ancestor chain. 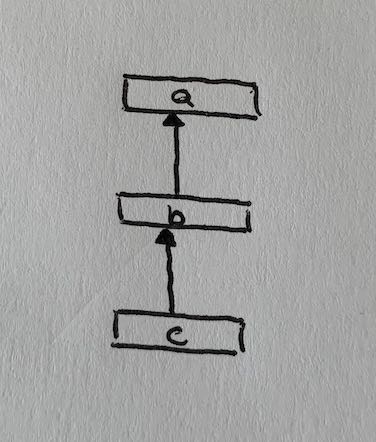 Because a transaction can have multiple inputs, it's possible that more than one of its parents are in the mempool. This is the case of multiple parents. 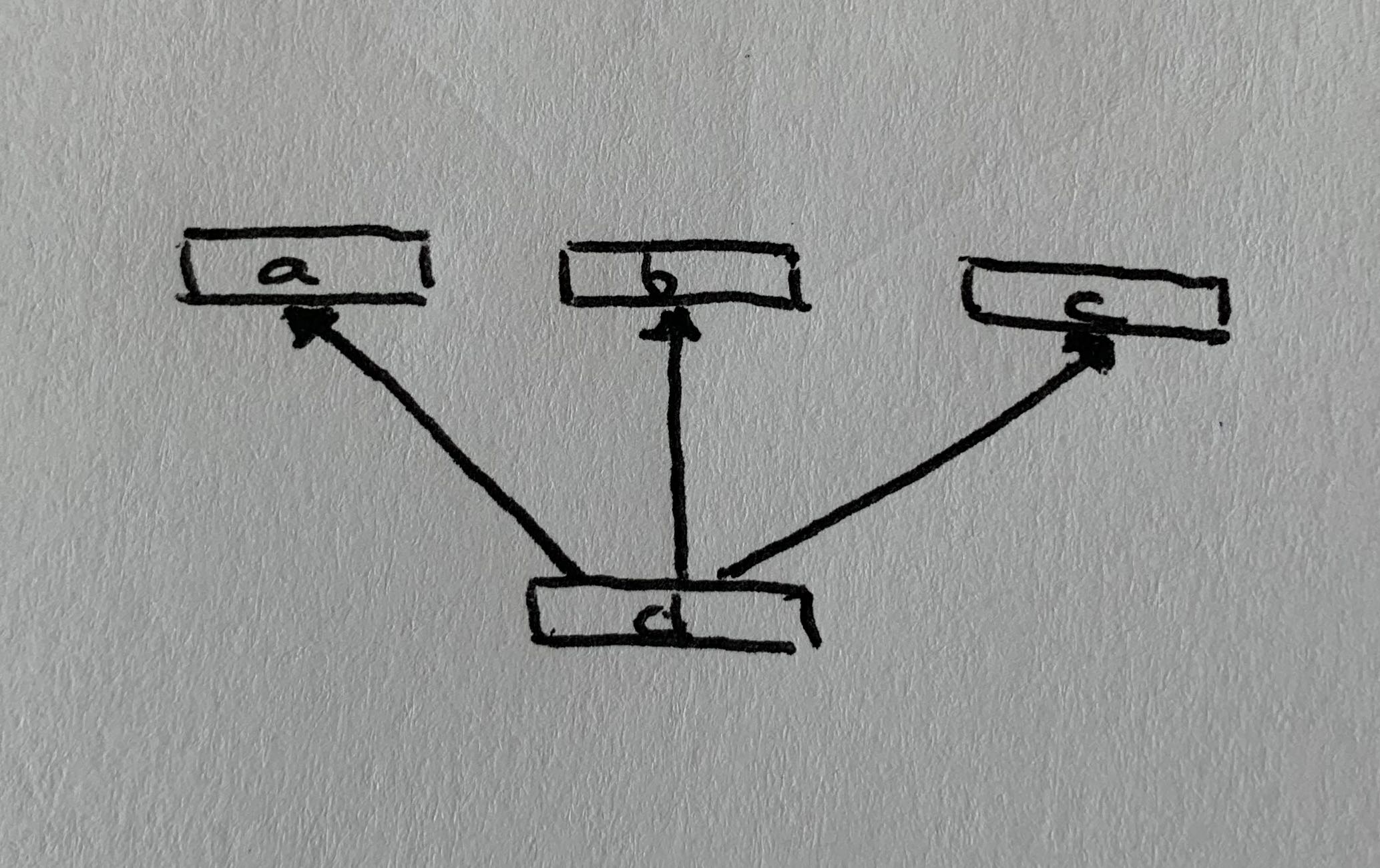 Because a transaction can have multiple outputs, it's possible that multiple children can spend from a single parent. 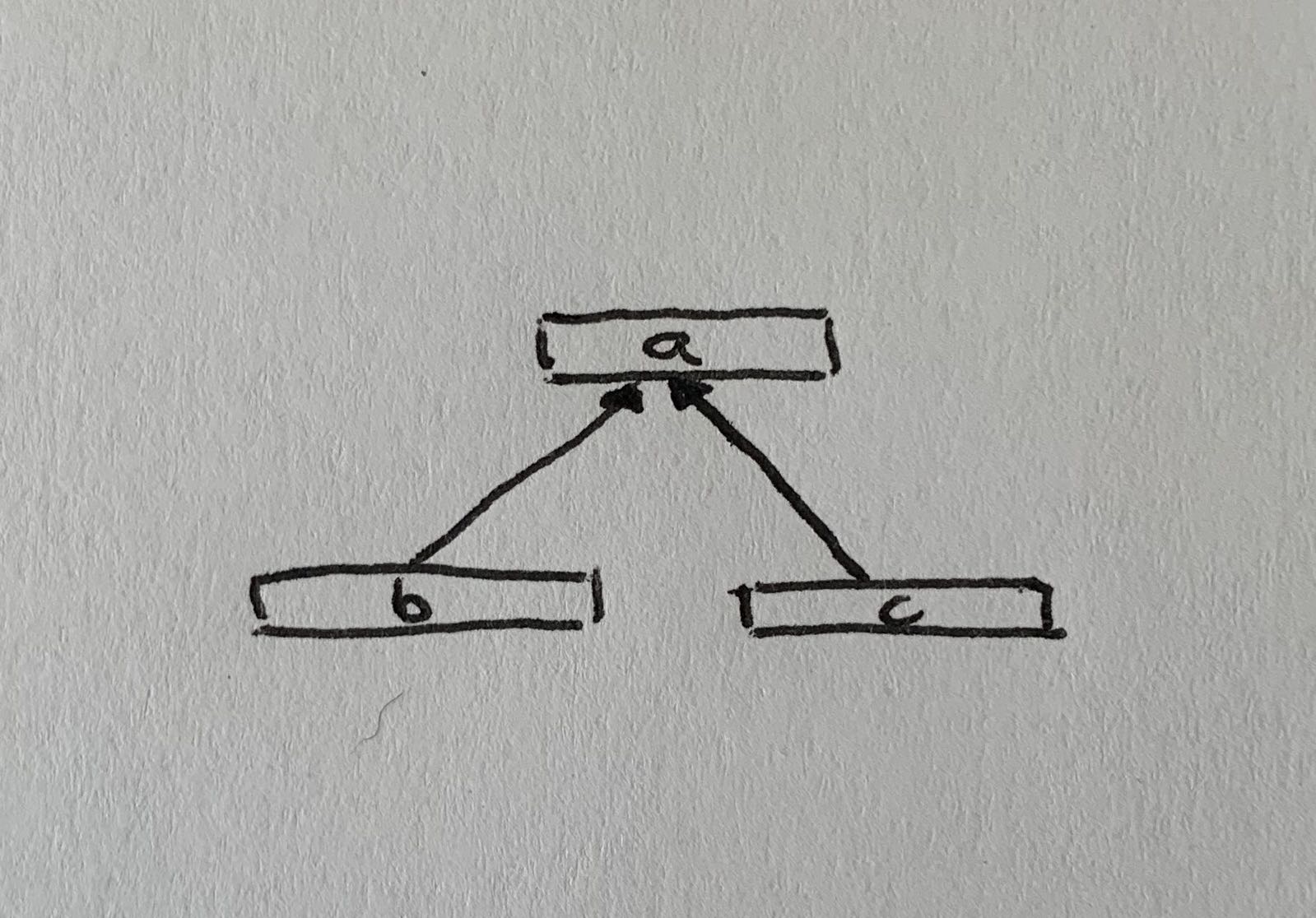 We can then get really crazy and start to combine things. 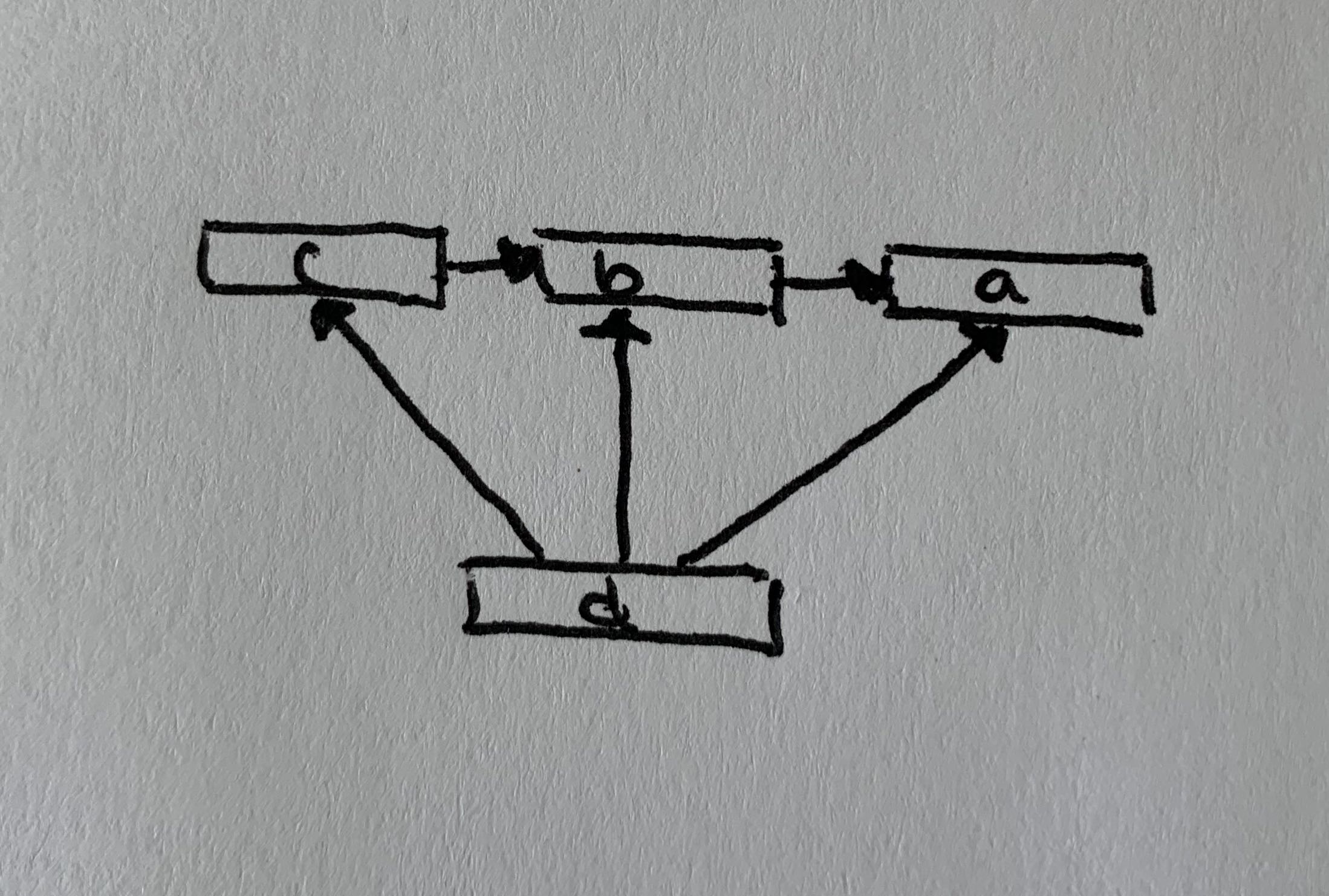 Intuitively we are treating our transactions as vertices and the link between inputs and outputs as the edges.

The neat thing is that all of these parent-child relationships point from the child to the parent. As a result we say the graph is directed: the graph has edges that go from one direction to another.

We also observe that we never loop back. In fact, a parent can never spend a child. It's impossible for this to happen because the parent would be invalid. It would be spending a transaction that does not yet exist (the child).

From a graph theory perspective, the fact that the we do not have loops means that the graph is acyclic: it does not contain cycles.

A directed acyclic graph is know known as a DAG. This information and reasoning will be helpful for our algorithm selection.

One other wrinkle is to consider what might happen if we have a parent transaction P with a low fee/size ratio and we attempt to spend it from a child C with a high fee/size ratio.

C will not be able to be selected until P is selected. If the ratio for P is really poor, then both P and C will be stuck! What if C has a fantastically high ratio? Should this impact P? Of course!

This selection feature is called "child pays for parent" (CPFP), which allows the child to be bundled with a parent (and its ancestors) and provide fee bumping. This is an important feature for allowing a tx recipient to fee bump the tx with too low of a fee. The net result of CPFP is that transaction ancestor chains can be bundled and considered in aggregate.

Now that we've thought about the problem a bit, lets see how we might solve it. To make our algorithm simpler, let's break the problem down into two smaller discrete problems:

Making the problem smaller helps us reason about each piece better.

As transactions arrive in the mempool, it would be helpful to know which transactions have some relationship in any way, shape, or form. We aren't concerning ourselves with ordering yet.

As mentioned already a directed graph is a graph one where the edges have a direction (point from one vertex to another vertex). For directed graphs, there is a concept known as strongly connected components. It is defined as a maximal set of vertices where each vertex is reachable from every other vertex in the subset:

The above diagram has three strongly connected components outlined in the dotted lines. Notice that in each of the SCC, every vertex is reachable from every other vertex.

Astute readers may spot a major problem: two of the components have cycles. In fact, for a strongly connected component to have more than a single vertex, it MUST contain cycles.

As we found out above, Bitcoin mempool transactions are acyclic (do not contain cycles). Therefore, the concept of strongly connected components isn't going to work for us. But let's see what a a Bitcoin mempool graph might look like: 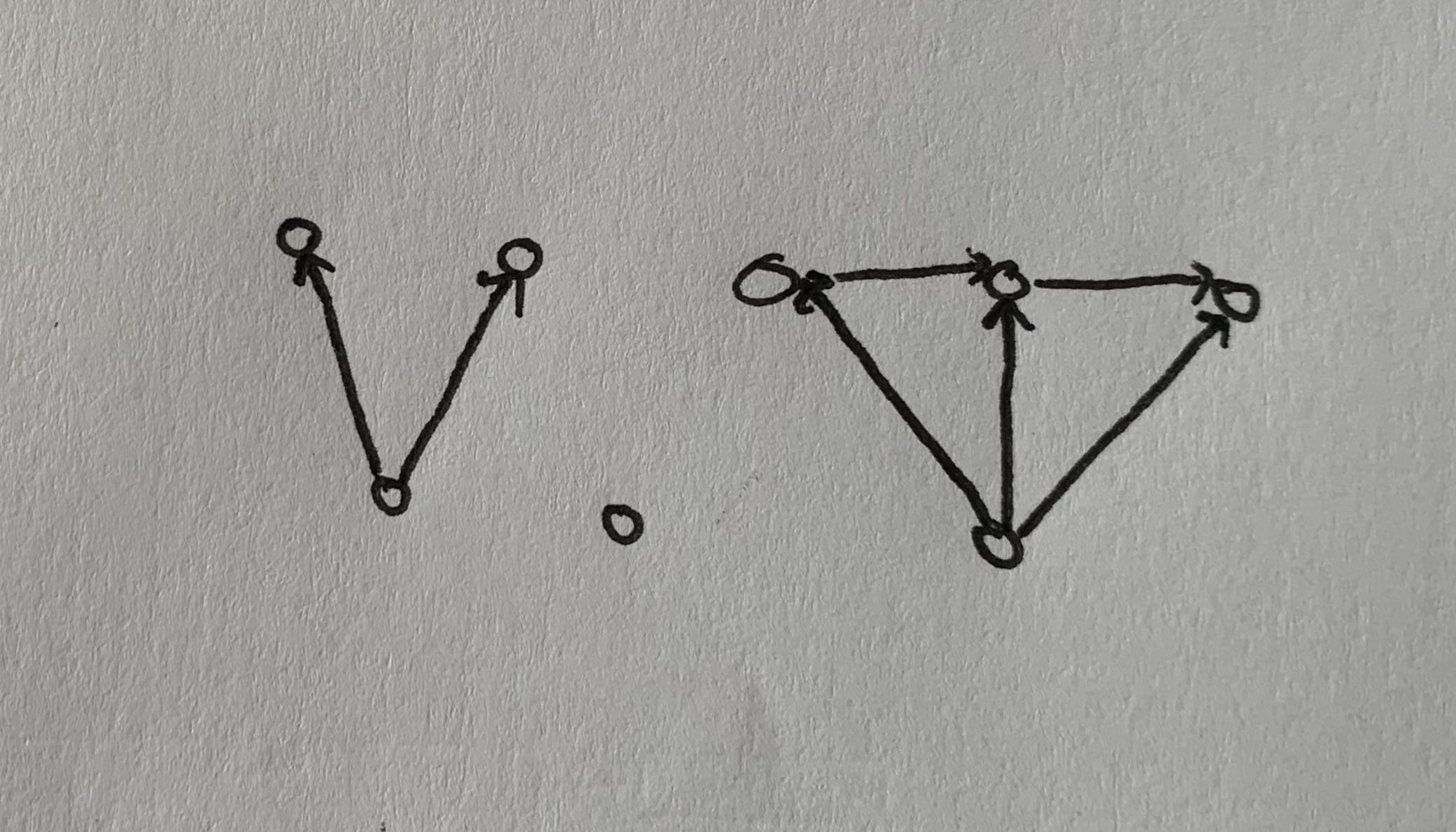 As you can see we have no cycles. If we were to count the strongly connected components we would have eight individual nodes. Not helpful.

But what if we simplify and ask to explore whether any edge exists, regardless of direction, between two vertices? Well, this is called a weakly connected graph and it turns out we can find the weakly connected components of it.

So if we take our Bitcoin transaction graph, ignore edge direction and find the connected components we end up with groups of transactions. Eureka!

There is also an incredibly efficient way to find connected components in an undirected graph: the disjoint-set (aka union-find) data structure.

The purpose of this disjoint-set is to maintain independent sets of information. We do this by supporting two operations: union and find.

There are several ways to implement this data structure that result in various run times. A simple naive implementation use a HashMap to store a set id for each item.

In this case the union operation is slow O(n), at least in comparison to the constant time find operation. If we perform that n times to build the full disjoint-set we end up with O(n^2). Fortunately there are vastly more efficient ways to construct a disjoint-set!

Treating elements as a tree and using a variety of techniques it is possible to get the amortized time per operation to O(m α(n)) for m operations on n elements. α is the inverse-Ackermann function, which is essentially constant for realistic input sizes link. That's a lot of time-complexity soup to arrive at the fact we can build a disjoint-set in almost linear time using a simple algorithm.

If you want to explore this data structure in more depth, I recommend starting with the Wikipedia article and this lecture.

To translate this into our problem of mempool selection we can do the following:

After completing this, all transactions that are related will belong to the same set. We were able to do this in near-linear time!

With the connected components, we can easily create an aggregate fee and aggregate size by summing the values of the transactions that belong to same set. This operation would also occur in near-linear time!

Now that we know how to group transactions efficiently we can find bundles of transactions and use that as input into our knapsack optimization.

This still leaves the remaining problem of how to order those transactions.

When we insert transactions into a block we need to be sure that parents precede children. And for those parents we need to know if their parents were already included.

Fortunately, there are a few efficient ways to find the topological ordering of a DAG. The simplest algorithm is a form of depth first search which will run in linear time!

You can start at any vertex and DFS will correctly order a DAG.

This algorithm stores values in completion order, which means the parents will be stored first and the children stored last.

This is exactly what we need! Pretty cool. More information on topological sort.

We can now make our complete algorithm work like this:

Can we do better? Most certainly.

Because we've reduced the parent-child relationship problem to single-aggregate values we can go back to using a dynamic programming algorithm for knapsack. This gets us away from a greedy approximation which is not 100% optimal. This change is likely a small improvement.

We're also selecting entire sets of transactions. In reality, Bitcoin limits the total size of nested transaction set, but it is certainly possible that the full transaction set may be sub-optimal. So it may be possible to break ordered transaction sets into ordered subset. This takes us back to another combinatorial optimization problem. Fun to think about if you're inclined.

I hope you've enjoyed this article and if you have any other thoughts, please leave them in the comments!

Since Node v11.2.0 was released we can now use ChaCha20-Poly1305 as an AEAD cipher! However, if you search for ChaCha20 on the crypto documentation page, you will find nothing. This article is a quick guide on how to use chacha20-poly1305 AEAD and

A semaphore is concurrency construct that is used to limit or throttle access to a resource. This article shows a simple semaphore class in Node.js that can be used to limit execution of functions. Usage of the class looks like: // create a semaphore