This blog runs on Ghost. I like Ghost quite a bit. Sadly, I was often remiss in updating to the latest version. This weekend I finally got to the todo item of updating this site.

To make things easier on myself in the future, I decided to use Docker and ECS to deploy the site. This decision was largely fueled by the availability of official Ghost container on Docker Hub and the ease of updating versions with Docker and ECS.

Before we get started with ECS I'm going to get things running locally to ensure that everything is peachy.

I'm assuming that you have some baseline understanding of Docker. Beyond the obvious, this means you're familiar with mounting volumes, configuring container links, and exposing ports.

The first thing I did to build out this site on ECS was create a local Docker version of the pieces. This consists of two containers:

The first step was creating a few directories on my MacBook for providing information to the containers. I create two directories: ghost and nginx.

With everything set up, I can run Ghost as a container with the following Docker run command:

A few things are going on here:

With the container running, I can access the blog at http://localhost:2368!

Next up is getting NGINX running to perform request forwarding.

We start configuring NGINX by creating a configuration file for the blog in our previously created folder:

Creating a config for NGINX that will map to the Ghost container looks like this:

The above config listens on port 80 for requests to the derpturkey.com domain. These requests are forwarded to the host named ghost on on port 2368.

With this all setup, we can now start the NGINX container with the following run command:

A few things going on here:

The last thing was adding a host entry on my machine so that NGIX works correctly (it's expected the host derpturkey.com

And voila, it works! Then I deleted all that hard work because it's time for ECS.

Elastic Container Services is Amazon's play in the container management game. I'll walk through a few concepts before going over how to translate the above into ECS.

Those definitions out of the way...

The first step is creating the Cluster. I did this by navigating to the ECS Management page in Amazon and creating a new Cluster. Basically, you just name the cluster.

Once I had the cluster created, I had to create some EC2 Instances to join the cluster. Amazon provides decent information on creating ECS instances but I'll walk you through the basics.

The easiest way is to search the Community AMIs for amazon-ecs-optimized. This will provide a list AMIs from Amazon that work with ECS. At the time of this writing, amzn-ami-2016.09.a-amazon-ecs-optimized was the most recent instance.

Additionally, the instance will need to be launched with the IAM Role of ec2InstanceRole. More information about setting up this role can be found here.

Finally, you need to tell the EC2 instance to join the cluster. This can be done in the Advanced section by adding a script block to configure the ECS agent. You simply provide the name of the cluster you previously created as the ECS_CLUSTER key/value.

Complete your instance creation process and wait a few minutes for the instance to start. It should appear in the cluster after it has started.

Next is actually mapping the Docker run commands previously executed into tasks. Start by creating a new task definition.

Before I create the container definitions, I want to first create two volumes that correspond to the folders we created on our local machine.

The two volumes define the path to the volume data on our host instance.

Important: After creating these volumes you'll want to log into the EC2 instance you previously created and create the /ecs/ghost and /ecs/nginx folders. You can put the data from your local machine into those folders after you create the folders

Now that I had volumes, I started by creating a container for Ghost.

The first step is naming the container ghost and providing the image. In this case, I used the image with version tag ghost:0.11.2. Using the versioned image tag facilitates updates in the future. All you need to do to update is update the task definition with the new image version when you want to upgrade.

Additionally, I added port mappings for 2368 on the host and 2368 on the container to facilitate testing and direct connectivity. 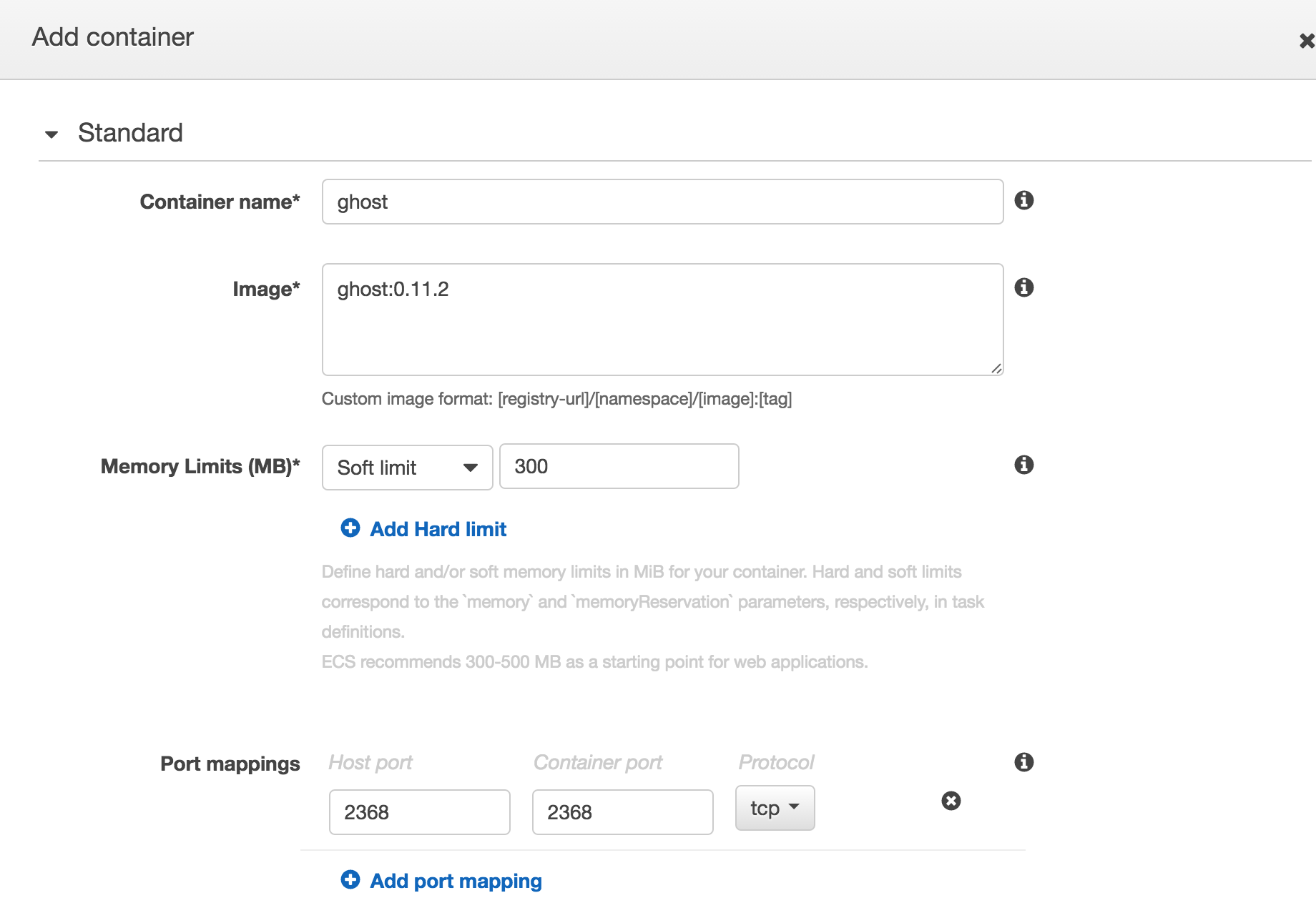 Next was adding the environment variable for NODE_ENV=production as was done in the Docker run command previously: 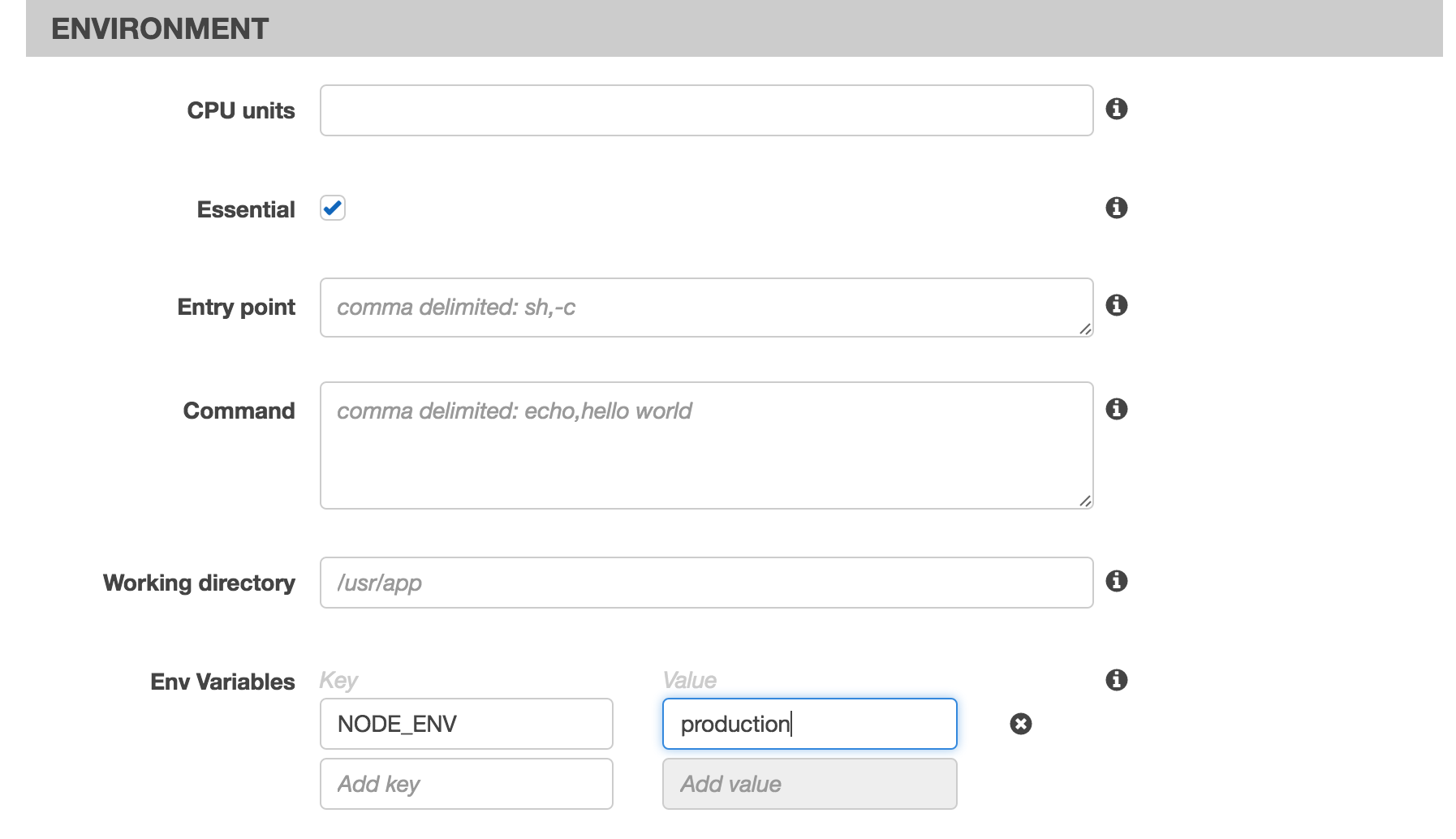 The final piece was mounting the ghost volume into the /var/lib/ghost path on the container:

At this point, the Ghost container is ready to rock.

Next up is creating the NGINX container.

Start by defining the NGINX conainer and image. Again I use the versioned image to facilitate upgrades in the future. 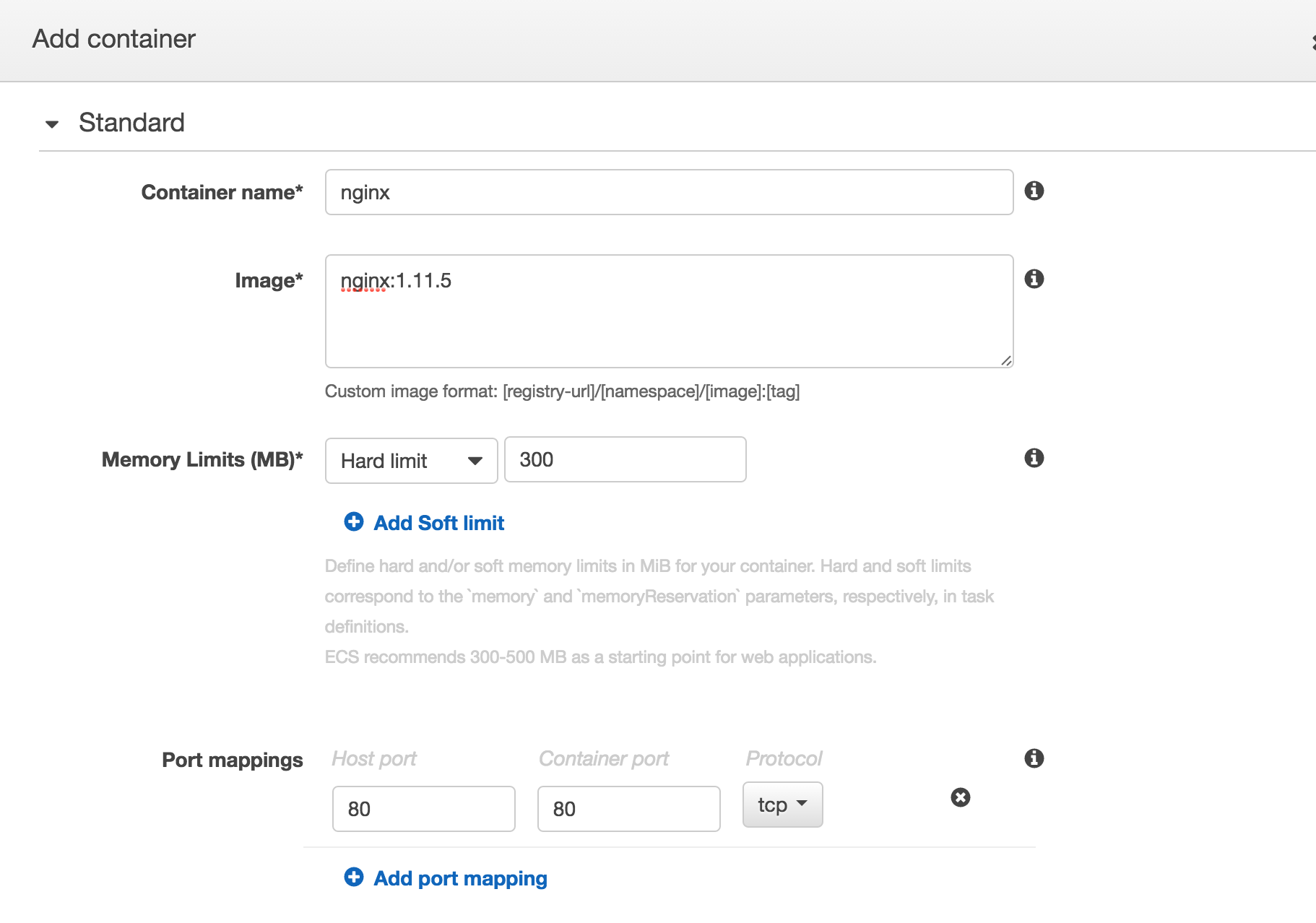 Additionally, this container has port 80 on the host mapped to port 80 in the container. 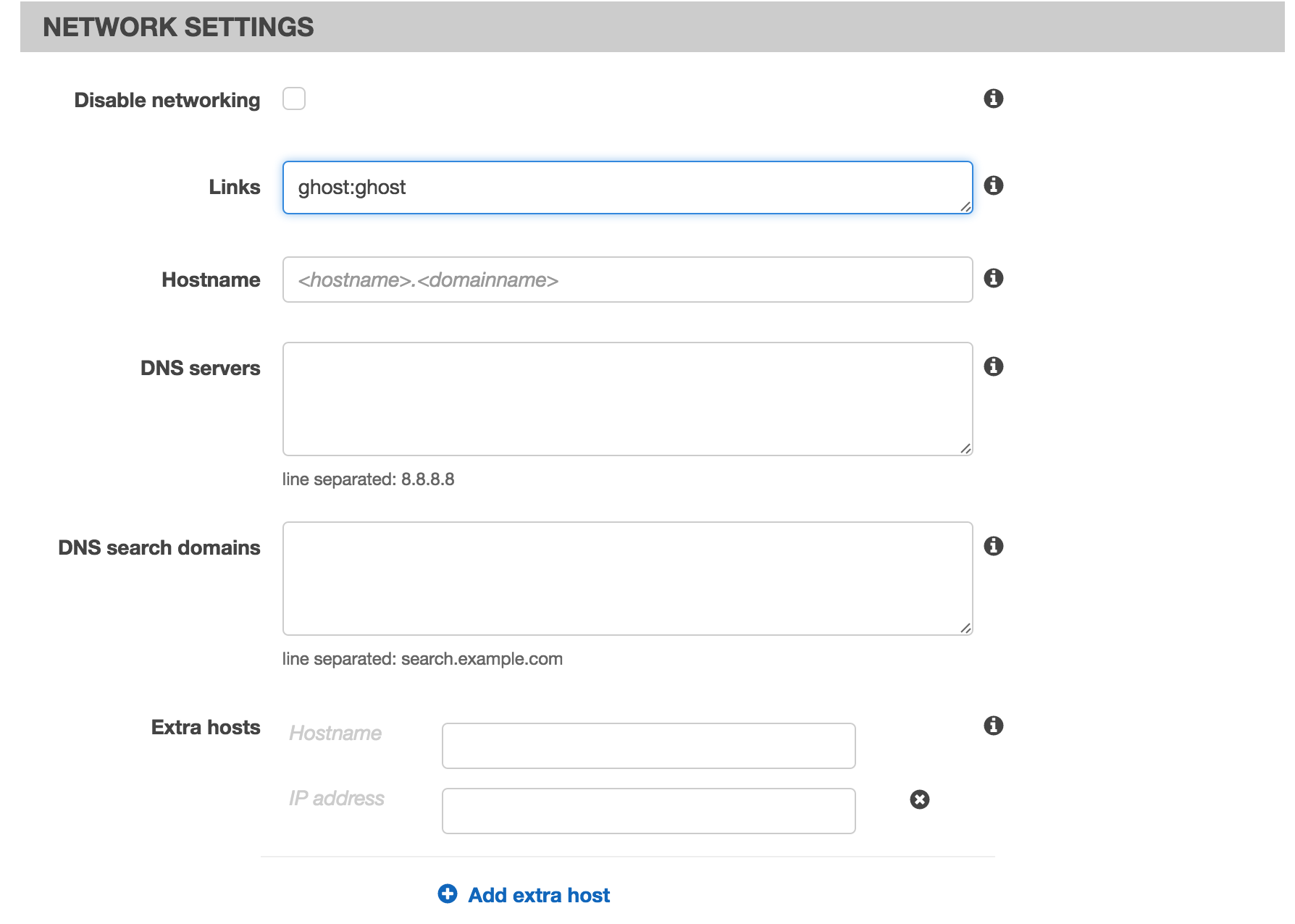 Finally, mount the configuration file that was generated in the nginx-conf volume to the required location in /etc/nginx/conf.d/blog.conf

Save your containers and your task. You're all set!

The final piece of the puzzle is defining the service that executes your task on the instance. This piece is pretty easy as you basically select the Task and Cluster and then specify how many tasks you want to run.

In this case, I've also said the minimum healthy percentage is 0 and the maximum is 100. This means that when I update the service it will shut down my site for a minute while the tasks update. This is ok for this deployment because it doesn't require a zero-downtime update.

Once the service is defined, the Tasks should execute and the site will be live!

The last piece is how to manage updates. Simply put, this requires creating a new revision of the Task Definition.

In the new revision of the Task Definition, you can update the image of the containers to the latest version of the Containers.

Once this is completed, you simply update the Service to point to the new version of the Task:

The cluster will automatically stop the existing containers and start the new task definition.

That's a lot of information and much of it requires understanding ECS and Docker. Hopefully that gave you enough of an overview to get your deployment working.

There are several challenges to configuring Consul/Nomad environments. This page documents some of those issues and configurations I've managed to get working. The largest challenge is configuring the networking to work correctly. Running services inside Docker containers requires different configuration options than running

If you need to query on string length, you will need to use the $where operator. As per the documentation, you can pass either a string with a JavaScript expression or a JavaScript function. The downside to this operation is that it operates on