In the needed to create a portable command line tool, I needed to make the footprint as small as possible. This involved embedding some resources as well as ILMerging the referenced assmeblies to make a single file that includes all dependencies.

I found Fody.Costura, which is an awesome NuGet package for embedding assembly references into your output assembly. This module will automatically perform the ILMerge for you. All you need to do is include the package in your project.

Usually, you can copy referenced files to the output folder. When creating a portable executable, you can instead change the Build Action to Embedded Resource. 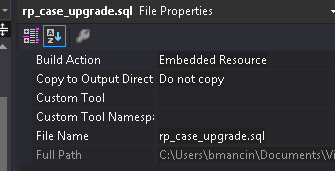 This will include the file in the output file which can be accessed in code.

The resource file will be named according to the Default Namespace of your project plus the path the file. In the above case, because the file was found in project sub-folder Sql, and the project's Default Namespace is DataCamel, the resource is accessed via the path DataCame.Sql.rp_case_upgrade.sql

Ran into an issue with Angular where it was caching GET requests in IE. I ended up modifying my application so that it appends no-cache headers for GET requests. This way I don't need to send modify each request or send additional values in

Anyone familiar with Linq's ToDictionary method may be looking for a similar technique in JavaScript. The cool thing about JavaScript is that first-order properties (properties attached to the first prototype of the instance) are usually implemented in a "dicationary-like" way. Thus we